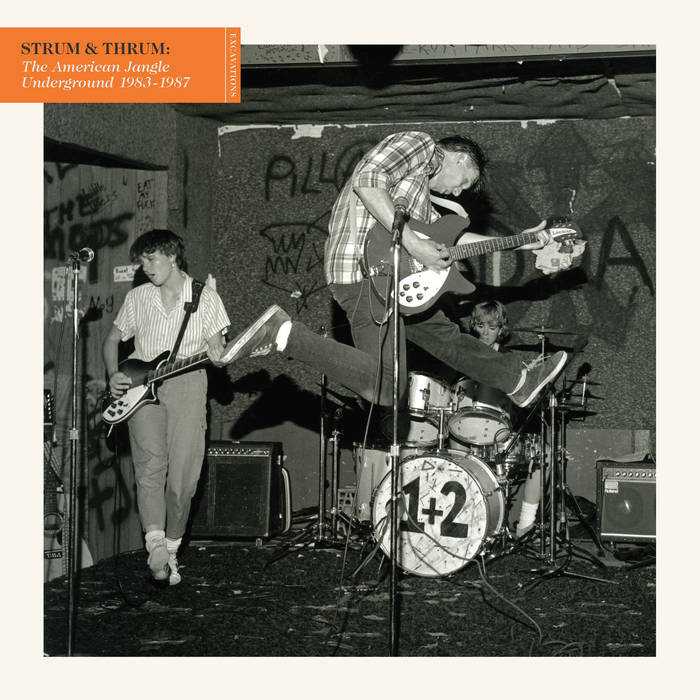 Terry A great compilation album of early to mid 80's indie and jangle pop bands. It brings back memories of rummaging through record stores looking for something other than hair bands. Its nice to see bands like Salem 66 represented. Favorite track: Salem 66 - Seven Steps Down.

Inspired by Pebbles, Killed By Death, Soul Jazz and Numero Group compilations, Excavations is a series dedicated to compiling forgotten music from the 1970s – 1990s that has a connection to Captured Tracks’ sound and aesthetic. Much like the Cleaners from Venus, the Wake, and Saäda Bonaire reissues we’ve put out, Excavations releases will bridge the past to our current roster and showcase the kinds of sounds that inspire us.

It makes sense that the first volume of Excavations is Strum & Thrum. As an American label, we've often wondered why British, Aussie, and Kiwi indie rock from the ‘80s has had the most influence on modern acts and the collector's market. Granted, the music released on Creation, Sarah, Cherry Red, Postcard, Flying Nun, et al. during that era was fantastic, but a parallel to this sound existed in the US and Canada as well. Outside of bands like R.E.M., the Rain Parade, the Dream Syndicate, and a few others, most of these bands received little attention from national or international press outlets and markets – unless they opted for a “big ‘80s” sound and signed to a major. The acts on this compilation are the antithesis of that, with a true DiY spirit that lead many of these bands to self-record and self-release within tiny local scenes in small cities and college towns across America.

Though hardcore dominated the American underground at the time, the indie scene was no less vital and operated utilizing many of the distribution channels hardcore set up. The two genres may have sounded nothing alike, but the DiY ethos and dedication to community was the same… But this isn’t the story we’re used to hearing. While noted underground archivist and compilation producer Johan Kugelberg has called the ‘80s the “Dark Ages” of indie rock, Strum & Thrum aims to shed light on this forgotten era of jangly, melodic rock music that emerged from the ashes of post punk and helped kick start the indie rock boom of the early ‘90s that continues to this day. Indeed, many artists featured on Strum & Thrum went on to be part of this boom – Archer Prewitt from the Sea & Cake, Jon Ginoli from Pansy Division, Ric Menck from Velvet Crush, Brent Rademaker from Beachwood Sparks, Barbara Manning, and more went on to be in well known bands in the ‘90s.

We’re very proud of this compilation and guarantee it’s an essential listen for any fan of classic ‘80s indie bands like the Go-Betweens, Felt, the Church, the Bats, Shop Assistants, and the like. And if you’re a fan of the early records Captured Tracks released by Beach Fossils, DIIV and Wild Nothing, you’ll find a lot to love here as well.

Bandcamp Daily  your guide to the world of Bandcamp

Serena Cherry debuts her black metal project, plus a Pick from the Crypt block from Svalbard